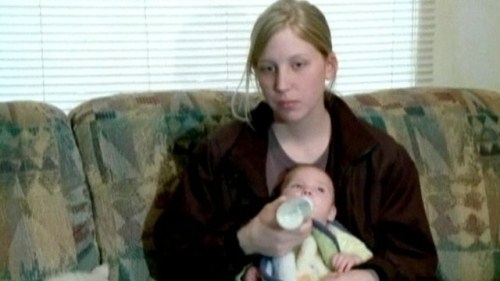 Widowed teen mother Sarah McKinley, 18, has been in the headlines recently being hailed as a hero after shooting and killing one of two intruders on New Year’s Eve to protect her 3 month old baby.

The holidays aren’t always about the holiday cheer, McKinley’s husband passing away from lung cancer on Christmas day in this case. The widowed mother wasn’t even able to fully mourn as two intruders broke into her house on New Year’s eve in what is believed an attempt to find painkillers.

“Obviously when somebody breaks into your house with a deadly weapon, they’re not here for anything good,” she said. “But I am very sorry and it wasn’t anything I wanted to do.”

McKinley then describes how everything went down: “I walked over and got the 12 gauge, went in the bedroom and got the pistol, put the bottle in [my son’s] mouth, then I called 911,”. She then asked the police officer on the other line about what to do in case the burglars come in: “I’ve got two guns in my hand. Is it OK to shoot him if he comes in my door?” Dispatcher Diane Graham told her “You do whatever you have to do to protect your baby.”

And so she did. Burglar number 1, Justin Shane Martin(aged 24) died while clutching a knife in his left hand. Burglar number 2 and accomplice to Martin, Dustin Louis Stewart(aged 29) turned himself to the police and has been since charged with murder. No action was taken against the mother as it was deemed she was well within her rights to defend herself against the attackers. The state of Oklahoma does allow the use of deadly force against intruders.

Reports coming out on Friday show the mother is still rattled by everything that happened during the holidays, and that she can’t believe all of it is real.