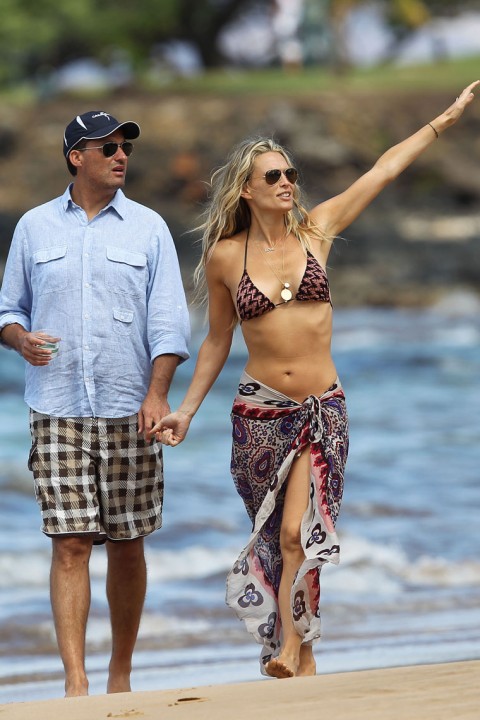 Molly Sims has announced on her own website under the title ‘MY EXCITING BABY NEWS’ that she’s soon to become a 1st time mommy. “The last time I had news that I was this excited to share with everyone was when Scott proposed last May.” By Scott, she is of course talking about Scott Stuber, who she ended up marrying in September of 2011. How excited is Sims exactly? “Today, I am absolutely, positively, downright over the moon to announce that we are pregnant! There are simply no words to describe the feeling… I finally get what they mean when they say pregnant women GLOW.” says the 38 year old model and actress.

But the baby wasn’t a mistake or something unexpected, Sims went  the traditional route: “Our little bundle of joy is a honeymoon baby, due at the end of June.” She confirms. “A first pregnancy is a nerve-wracking experience of course, but mostly we are just thrilled and excited. We can’t wait to meet him or her.. ” If we do the math from September(when they got married), we count exactly 9 months, so it does seem like she is telling the truth!

If creating the baby on their honeymoon wasn’t special enough, Sims even had a special way of  bringing the good news to her hubby: “And if you’re wondering where the fortune cookie comes in, that is how I told Scott that I was pregnant.” She says.”I hijacked the fortune cookie and typed a new message so that when he opened his cookie at the end of the meal, he found out he was going to be a daddy. You can only imagine how nervous I was during the entire meal (I think I ate a total of two bites…), but the look of surprise and pure joy on his face was priceless.” she says about her husband’s reaction to the news.

But don’t feel left out people! Molly Sims will be looking at you for advice since they’re ‘new at this’: “Since we’re new at this, I’ll probably be asking you all for advice over the next few months. I’ll also be creating created an album on my profile for all things baby that I’ll be updating as we go.”

Congratulations to the couple who seems to be genuinely excited about bringing a life on this planet, and double congratulations for not letting their somewhat  advanced age deter them from the thing that they really want!

Surprise! Molly Sims Is Pregnant With Baby No 3

Molly Sims Is all Smiles with Brooks & Scarlett