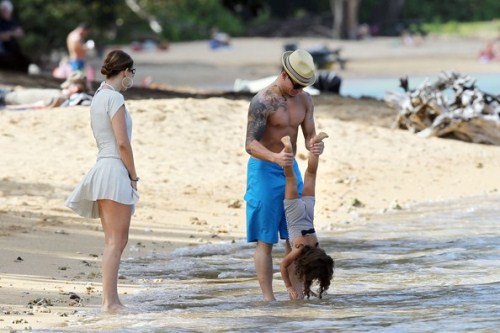 Sources are reporting that Marc Anthony had a major ‘flip out’ at Jennifer Lopez when he heard kids Max and Emme commit cardinal sin: “Marc couldn’t believe his ears when he heard Emme and Max utter the words ‘Daddy Casper’ during a recent visit,” confirms a source who adds that “He thinks Casper is nothing more than a young fling to make Jennifer feel better about herself after the divorce.”

Lopez’s boy-toy found himself at the center of another attack, courtesy of angry daddy Anthony: “Marc mockingly told Jennifer that if Casper wants to be called ‘Daddy’, he needs to start acting like it and pay some of their children’s expenses instead of just sponging off of her! Jennifer freaked out and told Marc he was childish, but she promised to correct the situation.”

Does Anthony have the right to be angry at J.Lo over allowing the kids to call Smart daddy? Or is Anthony a petulant, immature daddy who can’t handle Lopez having anyone else in her and the children life? After all, he should have known that this kind of situation was going to happen after their breakup…

Jennifer Lopez and Marc Anthony separated in July of 2011 after 7 years of marriage. On February 22nd, 2008 the Puertorican actress-singer gave birth to fraternal twins Emme Maribel Muñiz and Maximilian “Max” David Muñiz. Lopez has since been rumored to be romantically involved with back-up dancer Casper Smart, being spotted with the hunk on trips to Hawaii and Morocco last year.

Lopez has had her fair share of ‘flash-in-the-pan’ relationships over the years. Is Anthony right, and Lopez is using Smart as a toy to get over the emotional hill of divorce, or is this relationship something more than that?  History in this case would back up Anthony.