Madonna Speaks Out On Motherhood 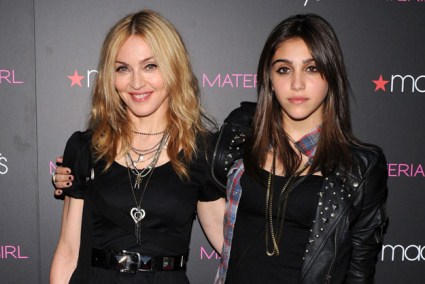 Can you imagine having Madonna as your Mom? The Material Girl has four kids – including a teenager! So how does the controversial singer/actress/author/director  – who’s always pushed the envelope – keep her 15 year old daughter Lourdes Leon in line?

The superstar has admitted parenting is tough and her teenage mini me can be a handful ‘She is always sneaking into my dressing room and borrowing things when I am still sleeping. She doesn’t fear me at all…I have no authority!‘ I think we’d all be sneaking into our Mom’s closet if she was Madonna! ‘If I say to my daughter, ‘That outfit is a little bit too risqué or revealing’ and she looks at me and says, ‘That’s rich coming from you. Sometimes, you have just have to say, ‘Because I said so!’

Lourdes is growing up quick – and has a striking resemblance to her famous Mom. The pair also work together. They have a clothing label called Material Girl. When she’s not helping put the collections together and overseeing photo shoots she’s attending high school in New York. Her father is Madonna’s former personal trainer Carlos Leon.

The Vogue singer has made no secret of the fact she’s a strict Mom saying a couple of years back  ‘My kids don’t watch TV. We have televisions but they’re not hooked up to anything but movies. TV is trash. I was raised without it, I didn’t miss anything. TV is poison. No-one even talks about it around here. We don’t have magazines or newspapers in the house either‘.