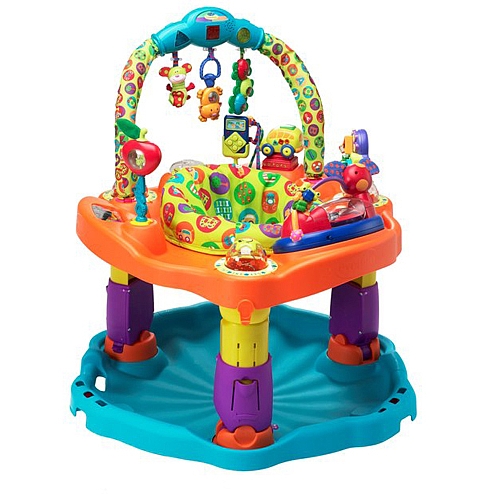 The Evenflo ExerSaucer Baby Steps is like a world in itself, or that’s how it can sometimes feel looking at our baby immerse herself in the world created by this toy. On the front side is a three-key mini piano that plays different tunes – these usually vary with each press of the buttons up to three different tunes. When our baby was younger (she’s now a week shy of her 6 month birthday!), the piano side, with its big and easy to press buttons, was the only part of this amusement park Ava could really use. Nowadays, she has no problems rolling the dog bone or playing with the different shapes attached to the mirror, or even looking at herself in the mirror. She’s even at the level or reaching to the pull-down toys on the opposite side which have a similar function to the piano keys, but are obviously a little more advanced.

The Evenflo Babysteps is a good way to visually see the progression of your baby as he/she goes from hitting keys and objects accidentally, to having a mastery of the different facets of the toy that could and will leave you amazed. You see that your little baby girl (in my case) is no longer so little.

Another reason why we like this toy is that it is a great way for a baby to let out some of his/her energy. Hitting those keys, pulling on those chords, hitting and smashing buttons, and just overall enjoying the different lights, will drain the energy right out of your baby and will make for an easy nap right after. If your baby likes it as much as ours, you’ll also be able to hear some unique sounds coming out of her and even some big smiles. It certainly seems like she enjoys the attention she gets while she’s in her ExerSaucer.

One downfall of the toy is the amount of batteries required: 9 AAA batteries are required to have it fully functional. That might seem like a lot, but we’ve been using ours for around two and a half months without needing to change 1 battery. It might not be a huge problem, but it’s something to consider.

In our house, this is probably the toy with the most mileage in the last 2 months, and will get more use in the future as Ava grows. According to the makers, this ExerSaucer can be used until walking age.

You can view this item Toys R Us

Beyonce: “I’ve Been Trying My Best Not To Lose Control”