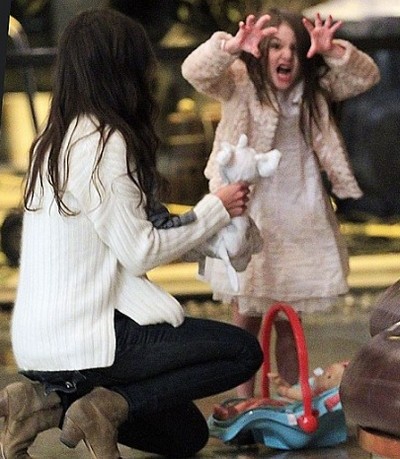 “Jack and Jill” actress Katie Holmes watched on as her daughter Suri Cruise packed up her baby doll before exiting the building in New York City, New York on November 10, 2011.  Katie then picked Suri up and held her tight while she made faces at the cameras with a nibbled cookie in hand.

Even tough Suri is photographed often by the paparazzi today she was not in the mood for it as Mom and her arrived at TV studios in New York, where Holmes was making an appearance on the David Letterman Show.

If Suri ends up being a normal, well adjusted child it will be a miracle.   She is always dragged around for photo ops, I don’t blame her for being fed up.  Shame on Katie and Tom for not keeping her out of the public eye.

Note to Kate:  Suri can walk, at five years old she does not have to be carried all the time!

Hilary Duff Glows As Her Bump Begins To Grow