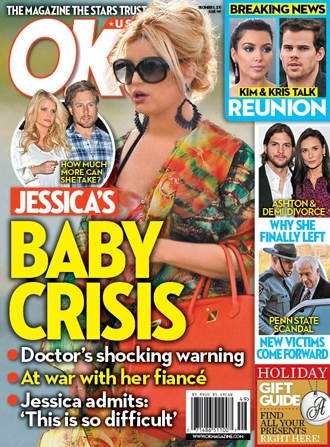 Jessica Simpson, 31, took to her twitter account October 31st, 2011 to confirm her pregnancy.  She tweeted pictures of her dressed as a mummy with the message, ‘It’s True! I am going to be a mummy!’

The magazine is now reporting that Jessica has had a baby crisis and she has been giving a warning by her doctor to take it easy.  She is also rumored to be at war with her fiancé Eric Johnson. Rumor has it  he wants a whopping 1/2 of her fortune which not only includes her singing career but part of her fashion empire.

OK! has more: “She’s said it’s been a difficult pregnancy — she’s been dizzy and nauseous,” a friend of the singer-entrepreneur tells OK!. Adds another insider: “She was totally unprepared for how hard it would be on her body.”

Jessica is said to be stretched to the limit and people do not know how much more she can take.  She is finding her pregnancy very difficult.  To find out more details pick up the current issue of OK!

Angelina Jolie’s Assistant Claims She Drinks Too Much!

Seal and Heidi Klum Want To Adopt A Child