Hugh Jackman And Family Go For A Big Apple Walk 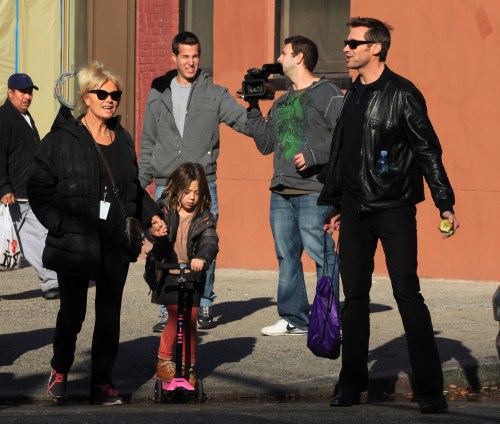 Hugh Jackman and wife Deborah-Lee Furness went for a walk with their daughter Ava in New York City on Wednesday.  Jackman enjoyed an apple as daughter, Ava rode a scooter next to him.  Ava held hands with mom, Deborah as she rode her bike across the street.

Jackman revealed to Access Hollywood that his son, Oscar is realizing that his dad is pretty useful when it come to helping him out with the ladies.

“I have heard my son in the past kind of talk to other people about what I do, particularly girls. He’s right into girls, like around 14-year-old girls,” Jackman told.s

“He went up to these girls at the beach in Australia and they’re in their bikinis … and he’s just chatting to these girls, and I’m like, ‘Wow!’ And I’m sort of sort overhearing, and he’s like, ‘Yeah, my dad plays Wolverine.’

“He comes running up and he goes, ‘You’ve gotta sign some autographs – now! Now!’” Hugh recounted.

“My son will not let me sign autographs for anyone. He’s like, ‘Why do they want your autograph? This is my time with you!’ That day, forget it! I was signing autographs, pictures. I felt very strange. I was kind of pimping for my 11-year-old son.”

“Mommy & Me” Time For Ali Larter and Son Theodore

Alvin & The Chipmuncks Honored With a “Paw-Print” Ceremony