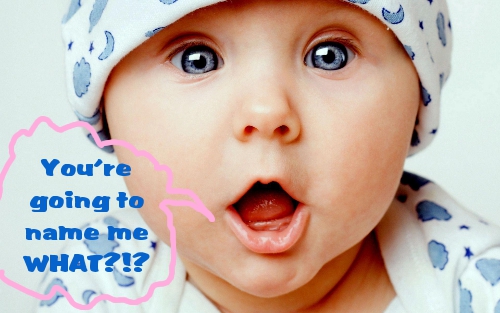 Our pals over at Nameberry, a site run by bestselling authors Pamela Redmond Satran andLinda Rosenkrantz, see the following as the twelve hottest trends of 2012:

Mariah Carey herself adhered to this trend by naming her bouncing baby daughter Monroe, as in the iconic blonde-bomshell. As observed by Nameberry, such surname names can pay tribute to fictional, historical, and/or modern day heroes. Other examples include: Landry, Gatsby (from that great American novel you might have heard of–or maybe even read–once in your life), and Palin (ermm, yah, you betcha’ . . . you know the one we’re talking about).

2. Trend Trying Hardest to Have It All: Same but Different Names

The act of taking a popular name, such as Emily or Isabella, and putting a unique spin on it so as to achieve a classic — yet unique — name.

As asserted by Nameberry, these somewhat violent times we’ve found ourselves in have inspired parents to name their sons borderline violent things, such as Bear, Fox, Lynx, Breaker, Wilder, Ranger. Hmm. . . Perhaps I will name my son Volcano — that’s fierce and badass.

New and unique names beginning with A, such as: Acacia, Ada, Anais, Annelise, Anouk, Aria, Athena, and for boys, Alistair, Ambrose, Aragon, Archer, Arthur, and Augustas.

6. Consonant of the Moment: M

M names. Yay! To name a few, ones that are trending on Nameberry: for girls, Maeve, Magdalena, Maisie, Marguerite, Marlo/Marlowe, May, Mila, Millie, and Minnie, and for boys, Magnus, Micah, Miller, Milo, and Montgomery.

The movement away from “noun” names and toward adjective names, such as: True, Brave, Sunny, Golden, Happy. Soccer player Gabriel Zakuani has taken this trend to heard and named his son “Trendy.” These names just seem so incredibly classy. I think we should start a verb trend next. I’ll send the next person to name their child “Running” or “Jumping” a ten dollar Starbuckscard.

Oh hi, Betty. Maybe this is a nod to the irreplaceable Betty White? January Jones also brings this name to life through her Mad Men character Betty Draper.

A tribute to the “the gun-toting, pot-dealing grandpa Arlo Givens on television’s Justified.”

11. Name Trend Ready To Jump The Shark: The –ley Names

Basically, just tacking -ley to the end of anything and calling it a name. Nickley Sanfordley? Should that be my new pen name?

Nicknames ending in -ie were apparently all the rage in the nineteenth century, and now they’re making a comeback!

Thanks, Nameberry for all this awesome research you’ve done! It’s so interesting to see how prominent forces in pop culture — and even those existing outside of our celeb realm — influence the way parents choose to name their children. Quite fascinating.

You know you’re a mom when..