Tilda Swinton Was Afraid She Would Give Birth To The Devil, Huh.. 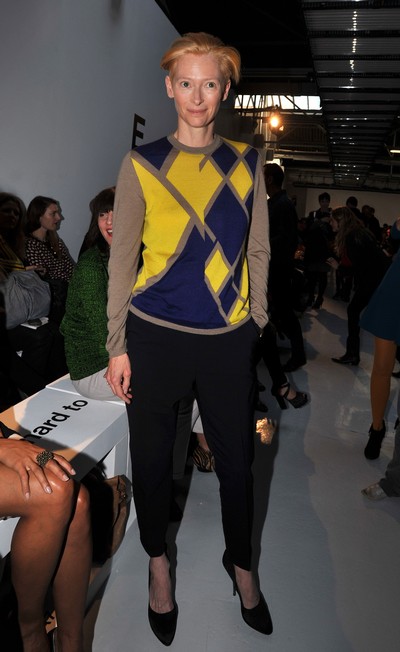 British actress Tilda Swinton, 50, says it’s every mother’s “nightmare” they will give birth to the “devil”. LOL not sure what she is talking about when I gave birth to my daughter the least thing in the world I thought of was she would be a devil.  Perhaps British women are different 😉

Tilda  has 13-year-old twins, Honor and Xavier, with partner John Byrne – plays Eva Khatchadourian whose son commits mass murder in new movie ‘We Need to Talk About Kevin’ and she admits every expectant woman has fears of what their child will be like.

“What I find most intriguing about Eva is not that she gives birth to and raises this misanthropic and alienated, sociopathic child and that its really foreign and outside of herself. The thing that’s really the nightmare is that she recognises it only too well, because its hers, The misanthropy is hers. That violence is hers.”

Yikes I don’t know what she was smoking but she is a little nuts.  Tilda,  says as a mother you have to make lots of sacrifices for your children, but it is ultimately worth it.

In an interview in the UK edition of Vogue magazine, she said: “It’s part of the deal of motherhood. I think everyone must suffer, I think that’s the whole point. That’s what life is.

“I don’t think that’s a secret or anything to get het up about. I think that’s how life is. It’s about growth and change, and it’s the bargain. Something goes, something comes. You always get something back.”

Thoughts?  Sound out in the comments below!

Parenting Under a Budget