Jennifer Connelly and Paul Bettany Take Their Children For A Walk 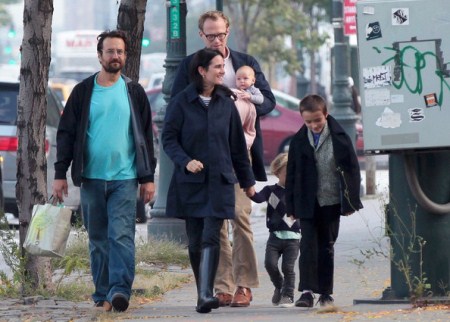 Jennifer Connelly and Paul Bettany were seen taking a walk with a friend and their three children in New York City. Kai was seen walking ahead while Kai held hands with Connely.  Bettany looked like a proud papa as he carried his new baby Agnes Lark.

Connelly showed up on Tuesday to the “Every Woman, Every Child” UN reception at NYC’s Grand Hyatt Hotel. She told that she felt compelled to step out for the reception, which relates to a cause near and dear to her heart.

“But unlike many women around the world, my birth was attended by a skilled midwife,” she continued. “I’m very excited to be here to support Save the Children and to support mothers around the world that don’t have access to health care.”

Paul Bettany: Having Young Children “Scare The S**t” Out Of You