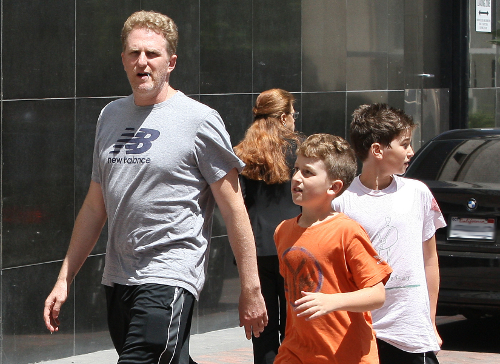 Actor Michael Rapaport strutted down the street yesterday with his sons, Maceo Shane (eldest) and Julian Ali (youngest), as the they all went to do some shopping at the Nike Town in L.A. I wonder if they bought themselves some pumped up kicks?

Rapaport recently was part of the documentary project entitled Beats Rhymes & Life: The Travels of a Tribe Called Quest. Has anyone heard of this movie? I hadn’t until now. I honestly wasn’t even entirely sure who Michael Rapaport was (I am an open book to you, awesomely awesome readers).

Thanks to Google, I discovered he’s had many roles in popular sitcoms — such as Friends — and TV dramas, including Boston Public and Prison Break. He’s starred in more than forty films, the earliest dating back to the early 90s. Yikes, impressive.

Is he anyone’s fave actor? Not gonna lie, I’m still not entirely sure who he is LOL.

Kate Gosselin’s Out Of A Job

Rod and Alastair Stewart Hit Up The Toy Store