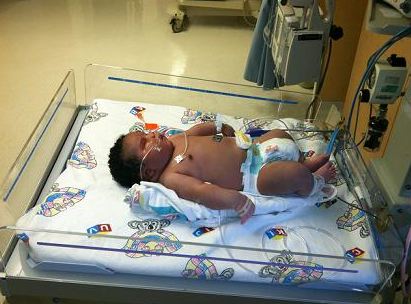 Janet Johnson and Michael Brown welcomed their baby boy into the world at a shockingly 16 pounds! The hospital workers don’t have diapers big enough for the baby, JaMichael “The Moose”. The baby weighs more than the average three to six-month old and it is possible that he might be the largest baby born in Texas!

“(The Dr) told us he was going be about 12lbs, but when he pulled him out it was a different story,” the proud dad says.The Texas couple was not expecting such a large baby. The baby was Janet’s fourth child by Caesarian. “We’re just amazed. I can’t believe he’s that big. A lot of the baby clothes we bought for him will have to be returned. They’re already too small for him to wear.”

After the exhausting and very painful labor, Janet is done with having kids. ‘That’s it, no more now,” she said.