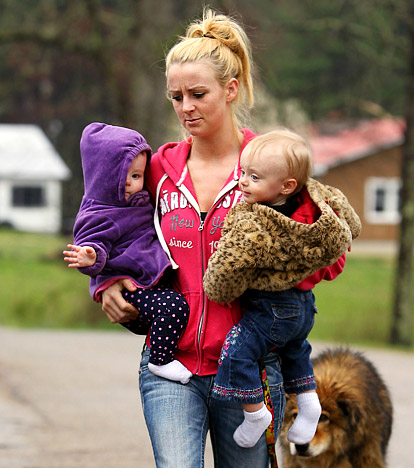 Teen Mom 2 star, Leah Messer is dating a new guy and he is a single dad too! Rumors that circulated  last week that Messer was back with her ex Robbie Kidd are incorrect. Messer is actually dating Tyler Blankenship  an aspiring race-car driver.

A friend said: “Leah and her mom went to watch him race last weekend. They had an awesome time, but she is trying to keep their relationship under wraps”

Nice friend LOL, I guess they paid her for the leak!

Tyler is separated from his wife Kelly and has son named Cashton.  He is not formally a race-car driver (aspiring),  but he is trying to make it as a professional while working as a self-employed tow truck driver.

Do you think it is better for Messer to have a new boyfriend? Or should she stay single for a bit and concentrate on her children?

Life According to Me, At 37 Weeks Pregnant