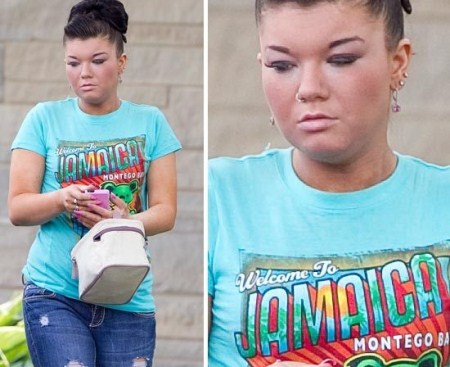 Teen Mom, Amber Portwood was spotted outside her house in Anderson, IN on Sunday.  This outing marks her first since being hospitalized for  an alleged suicide attempt. It has been reported that Gary Shirley, the father of Amber’s child called 911 on June 14 because he thought Amber “was having she was having a hard time with her life” and he didn’t “want her to kill herself.”

Portwood first gained fame from the show Teen Mom which chronicled her  journey into parenthood.  Footage of Portwood’s violent behavior towards the father of her child, Gary Shirley, prompted an investigation from the police department  as well as Child Protective Services. Portwood agreed to allow Indiana’s child protective services to monitor her for up to six months. She was later charged with three counts of domestic violence for incidents of abuse inflicted on Shirley.