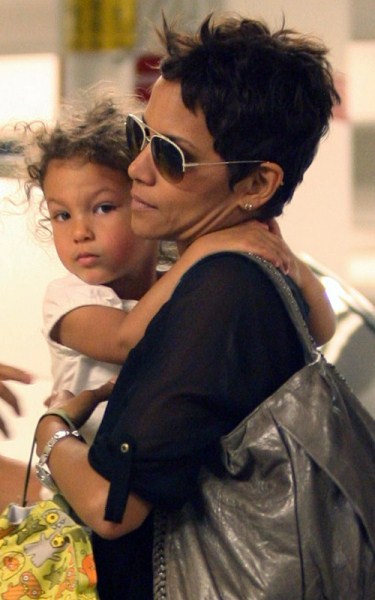 Halle Berry has been forced to drop out of a Broadway stage show opposite Samuel L. Jackson as she continues her child custody battle with ex-boyfriend Gabriel Aubry.

Halle was due to play a hotel maid who delivers a meal to U.S. civil rights leader Martin Luther King, Jr., played by Jackson, on the evening before he is assassinated in a production of ‘The Mountaintop.’

Berry has now withdrawn from the role so she can concentrate on fighting for custody of her daughter, Nahla, her only child with model Aubry.   The actress became embroiled in a legal fight with Aubry in December  when the model filed a paternity petition asking to be officially recognised as the three year old’s father following the couple’s split last year.

Aubry had appealed against Berry being allowed to take Nahla away with her on film shoots, forcing the star to drop out of upcoming movie New Year’s Eve.  But she has since won the right to take her daughter with her on movie locations across America and has rejoined the cast.

But a representative for The Mountaintop has now confirmed Berry has dropped out of the play to deal with her ongoing personal problems, saying “Ms. Berry would not be appearing in the role due to child-custody issues.”  At least Halle is putting her daughter first and that counts for something.

Justin Bieber Says His Trip To Israel Was ‘A Little Rough’