The Bold And The Beautiful (B&B) Spoilers: Steffy And Finn Welcome Son – Chaos Countered By Birth 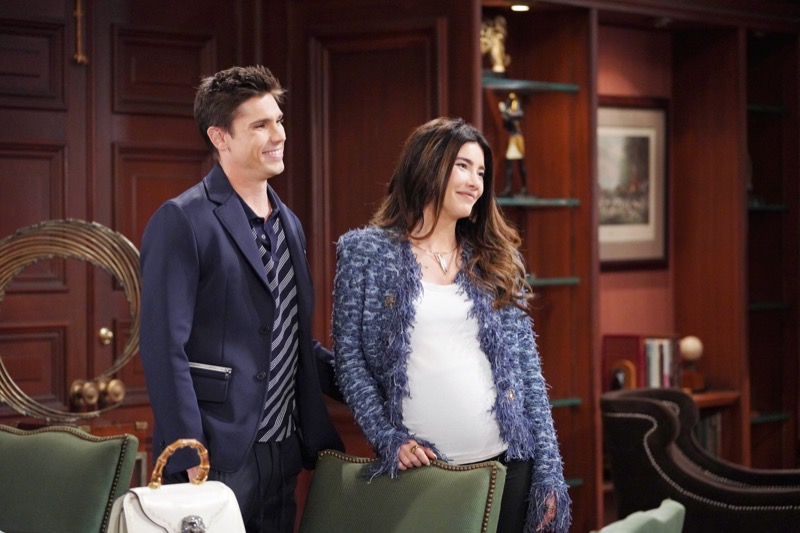 The Bold and the Beautiful (B&B) spoilers and updates tease that Steffy Forrester (Jacqueline MacInnes Wood) and John Finnegan (Tanner Novlan) welcome baby Finn into the world. Teasers indicate that Steffy goes into labor and delivers her and Finn’s baby within the next handful of episodes.

Sharp eyes took note of the sonogram that showed Steffy was 32 weeks pregnant after Sinn returned from recent trips. It was nice that the fans were given a heads-up as to when the baby was approximately expected.

A lot of chaos is playing out in other B&B storylines, as is to be expected in this soap opera. That makes this imminent birth a positive counter.

The Bold And The Beautiful Spoilers – Paring A Gift To Fans

The most devoted Steam fans are likely opposed to Sinn. However, it’s okay to have been a fan of Steffy and Liam Spencer (Scott Clifton) and also to support Steffy and Finn.

There is no doubt that B&B’s focus on Steam versus Lope was solid for many years. Wood, Clifton, Kim Matula (Hope Spencer from 2010 through 2016) and now, Annika Noelle (Hope since 2018), all made that happen with good scripts and solid performances.

But romantic triangles have their limits, as the daily grind of daytime drama requires fresh perspectives. The moment Steffy’s eyes lit up, as Finn stood by her bedside in the hospital last summer, the fans knew a gift was being offered. Sinn has certainly delivered on all reasonable expectations since that point in the plot.

The Bold And The Beautiful Updates – A Brother For Kelly Spencer

Kelly Spencer’s (Avalon and Colette Gray) father didn’t take a liking to Finn. Liam’s protective stance over Steffy went beyond the daughter they shared. He recognized that Steffy’s interests were changing and that new reality caught Liam off-guard.

Finn was bothered by Liam questioning his medical ethics during the period where Sinn was forming. While Novlan’s character eventually admitted that Liam was generally right, the manner in which the assertion was offered stuck in Finn’s craw.

Steffy allowed herself to deeply dig into a rut. She got to the point where her confidence was shot. The motorcycle accident led to the start of a brief pain-killer addiction.

Despite her move to Finn, Liam proved crucial in Steffy’s rescue. He was the one who came to the cliff house and found Steffy knocked out on the illegal pills Vincent Walker (Joe LoCicero) provided.

But the above details happened a while ago in real and soap time. Now, heading into late June, Steffy and her soon-to-be husband, Finn, are expecting the birth of their son. Yes, it’s time to appreciate and celebrate where this storyline has taken Sinn and the audience.

General Hospital (GH) Spoilers: Kelly Thibaud Films Herself Giving In To Her Desires

The Bold And The Beautiful (B&B) Spoilers: Casey Kasprzyk To Make Cameo Appearance