Ciara’s New Video Of Baby Future Will Melt Your Heart 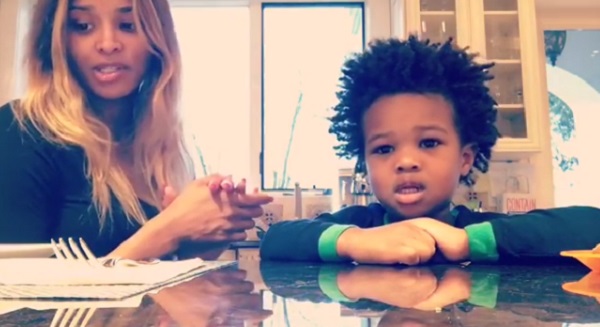 Ciara took to Instagram on December 28 to share an adorable video of her 2 year old son Future.  Baby Future looked precious seated at the table with his mom, before he ate, he said “Grace” all by himself.  The proud mom captioned the sweet video, “GRACE. So Proud Of My Baby! He can say it on his own now! I had to share!Have a great day everyone, and thank God for his GRACE.”

Baby Future is just a tiny toddler, but he has been in the limelight since the day that he was born.  Ciara has been embroiled in a nasty custody battle with her ex, rapper Future.  The former couple is constantly in the news, even though Ciara has moved on and is happily married to Russell Wilson.

In October Ciara announced that she was pregnant with baby number two, this is Ciara and Russell Wilson’s first child together.  The singer posted a photo of herself and Russell and captioned it, “On this special Birthday I received an abundance of love from friends and family.. and I’m excited to Finally share one of the Greatest Gifts of All that God could give.”

Since Ciara’s announcement, she has shown off her growing a baby bump on social media, and it looks like Future Jr. will have a baby brother or sister pretty soon!

GRACE 🙏🏽. So Proud Of My Baby! He can say it on his own now! I had to share!Have a great day everyone, and thank God for his GRACE ❤️