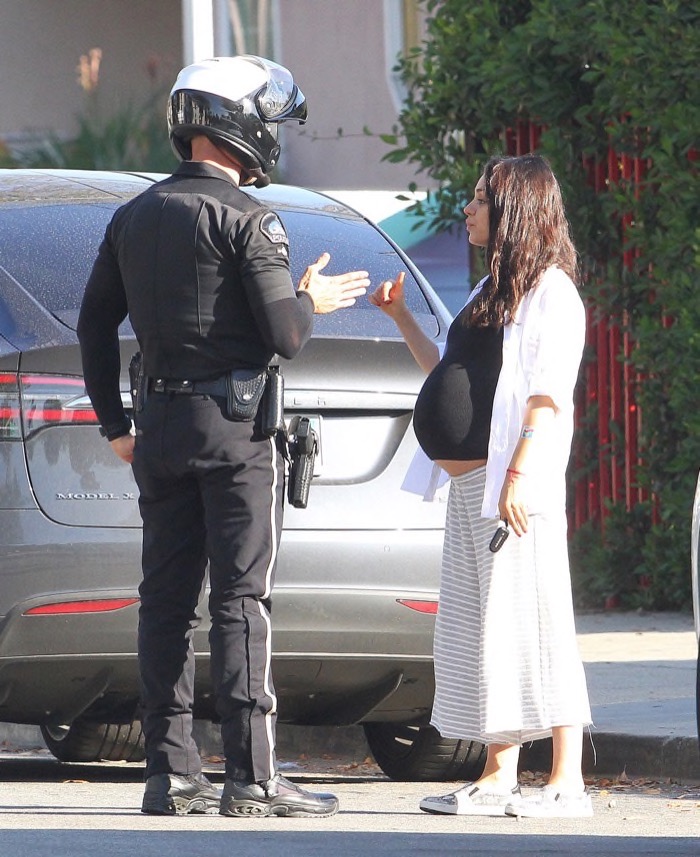 Mila Kunis was spotted out about with her daughter Wyatt in Los Angeles, CA on Monday (Nov. 7).

The Bad Moms actress looked ready to pop in a white cardigan and black shirt and a striped shirt that rested below her baby bump. She had an animated chat with a police officer while her daughter waited in their car.

Last week, Kunis penned an essay criticizing the sexism that exists in Hollywood.

“Throughout my career, there have been moments when I have been insulted, sidelined, paid less, creatively ignored, and otherwise diminished based on my gender,” she star wrote in A Plus magazine, an online publication founded by her husband, Ashton Kutcher.

She described being threatened by a movie producer when she refused to appear semi-nude on a magazine cover to promote a movie — and told that she would “never work in this town again.”

“I will work in this town again,” she declared. “but I will not work with you.”

Kutcher took to Facebook to praise his wife for coming forward with her story.

Their second child, a baby boy, is due to arrive in as little as six weeks.

Pregnant Molly Sims Dresses Up Her Bump In Blue