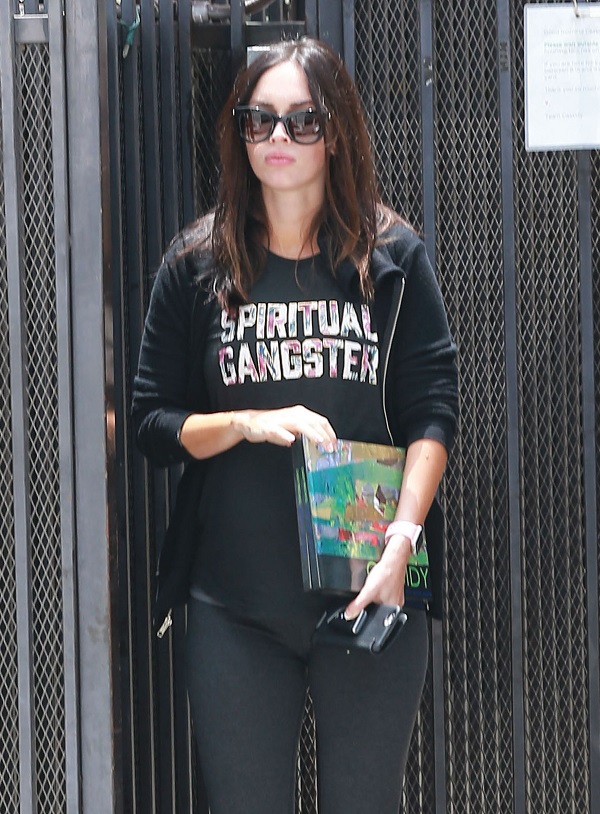 Pregnant Megan Fox was spotted out and about in Los Angeles with her baby bump on full display, the ‘Teenage Mutant Turtles’ actress is currently pregnant with baby number three.  Megan stopped by a friend’s house on Tuesday June 14, rocking a T-Shirt with the words “Spiritual Gangster” emblazed on the front, paired with a pair of comfy leggings.

Last year Megan Fox and her husband Brian Austin Green announced they they were splitting up and filing for divorce, however the couple reportedly decided to try and work things out when Megan Fox learned that she was pregnant and they have a third child on the way.  Brian and Megan already have two sons together, Noah Shannon Green and Bodhi Ransom Green.

Megan Fox and her hubby Brian Austin Green are waiting to find out the baby’s gender, and Megan is due any day now.  Fox revealed in an interview while promoting her new movie that her husband Brian is really hoping for a girl this time around.

The actress recently appeared on Jimmy Kimmel Live, and proved exactly why she is a “Spiritual Gangster.”  During her appearance, Megan revealed that she has been getting “messages” from her unborn baby.  And, she and Brian actually bought a new house and are moving, because her unborn baby sent her a message telling her to…

Megan dished to Jimmy Kimmel, “This baby wanted me to live somewhere else so we’re moving to a whole different place in Los Angeles because I feel like that’s where this baby wants to be raised.”

Brooke Shields And Rowan Go For A Walk In SoHo