Alessandra Ambrosio: Having a Perfect Body Isn’t Everything 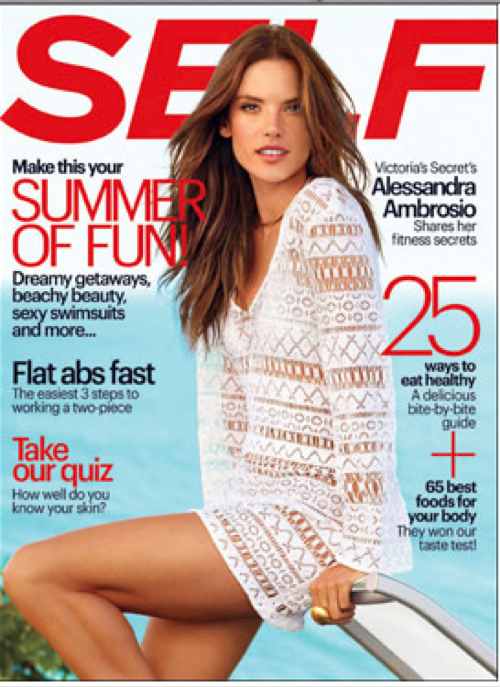 Posing on the cover of the Self magazine’s June 2014 issue, Alessandra Ambrossio opens up about her body and what’s really important to her in life.

The Brazilian-born supermodel admitted that she did not start working out until after giving birth to her first child.

“When I started with Victoria’s Secret at 21, I never worked out,” Ambrosio revealed. “Then when I got pregnant with my daughter, I gained about 60 pounds and had to walk the Victoria’s Secret show three months later,” she recalled. “That was the first time I had to really fight to get my body back into shape.”

Ambrosio shares the most important assest when it comes to being in a bikini.

“When you’re in a bikini, your abs are the most important,” the mom of two said. “I like doing bridges, and I’ll also finish a workout with 100 bicycle crunches.”

One area she doesn’t have to concentrate on is her arms!

“I don’t really do much for my arms; throwing my kids in the air helps already. Plus, as a Brazilian, I know the last thing a man is going to look at — even after your feet — is your arms!” she joked.

Despite being know for her amazing body, Ambrosio insists there’s more to life than looking good.

“Having a perfect body isn’t everything,” the model admitted. “I want my daughter to be nice, have a good education and be disciplined. That’s what makes people like her. A perfect butt doesn’t make an amazing person. It’s about feeling confident.”

Ambrosio and her fiance Jamie Mazur are parents to 5-year-old daughter Anja and 2-year-old son Noah.

Olivia Wilde Strolls With Otis in the Big Apple