Angelina Jolie: My Children Thought Maleficent Was Scary at First 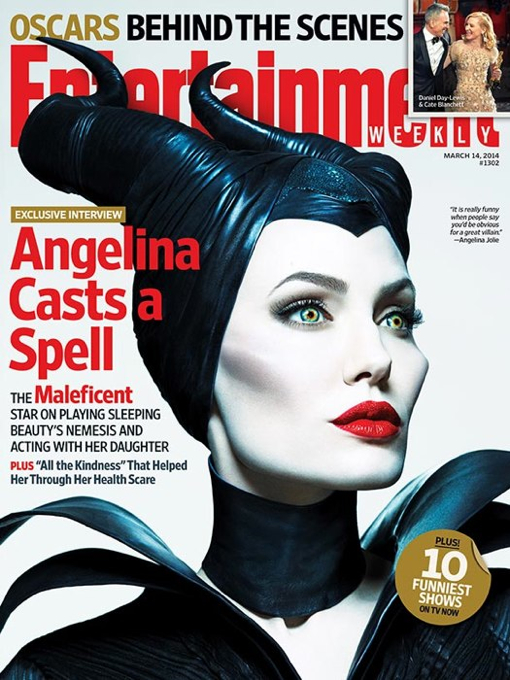 Angelina Jolie covers the latest issue of Entertainment Weekly as Maleficent, from the new Disney film. In the issue, she opens up about what her children initially thought of her role, and how her youngest daughter, Vivienne came to be cast in the film.

”It is really funny when people say you’d be obvious for a great villain,” she says with a laugh.

Jolie admits her children were against her taking on the role at first.

“They went, ‘She’s so scary!’ I said, ‘Let me tell you the real story but you can’t tell anybody.’ So this was my test too, like any parent,” she recalls. “The next day, I heard Shiloh getting into a fight with another kid, defending Maleficent, saying, ‘You don’t understand her!’ They got into a bit of an argument and I thought, that’s the reason to do the film.”

Her Maleficent costume scared all of the younger children, but her daughter, Vivienne. Unlike the other children, the 5-year-old wasn’t afraid because she was aware her mom was behind the scary looking features.

“We think it’s fun for our kids to have cameos and join us on set, but not to be actors. That’s not our goal for Brad [Pitt] and I at all,” Jolie explained of raising her six children with fiance Pitt. “But the other 3-and 4-year-old [performers] wouldn’t come near me. It had to be a child that liked me and wasn’t afraid of my horns and my eyes and my claws. So it had to be Viv.”

Although, not all Jolie’s children were so confident their mom was behind the costume and makeup.

“When Pax saw me for the first time, he ran away and got upset — and I thought he was kidding, so I was pretending to chase him until I actually found him crying,” Jolie recalled. “I had to take off pieces [of the makeup] in front of him to show him it was all fake and not freak out so much.”

“The exercise wasn’t how can we have fun with a villain?” Jolie says. “It was: What turns people evil and vile and aggressive and cruel? What could have possibly happened to her?”

The film hits theatres May 30.