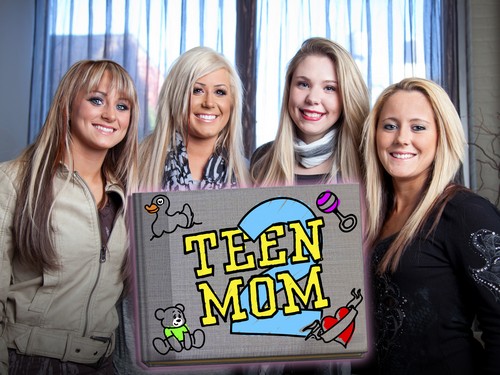 Although there was a lot of talk about Teen Mom 2 being cancelled MTV decided to renew it for season 5.  Teen Moms Leah Calvert, Kailyn Lowry, Chelsea Houska, Jenelle Evans will be around for more drama and this season is suppose to be intense.  On tonight’s season 5 premiere called, “Revelations,” Jenelle finds out she’s pregnant. Later, Leah struggles with Ali’s medical diagnosis.

If you have not watched the show before Teen Mom 2 is a spin-off of the MTV documentary series “16 and Pregnant.”  The show follows the stories of four girls from the second season of “16 and Pregnant” and documents the challenges of their first years of motherhood.  Each episode interweaves stories of four teenage girls who are navigating the bumpy terrain of adolescence, growing pains, and coming of age – all while facing the responsibility of being a young mother.

In the Season 5  we see the Teen Mom 2 girls and their babies, who aren’t babies anymore. MTV captured Leah Calvert’s struggles with her handicapped twin daughter, and how it is effecting her new marriage and the birth of her new baby. Viewers will get to watch Kail and her husband Javi buy their first home, and follow the pregnancy of Kailyn’s second son. Chelsea will be struggling with the birth of her ex Adam Lind’s new daughter and how it effects the daughter they had together’s life. And, the highly publicized pregnancy of Jenelle Evans, we will get to see it all unravel right before our eye