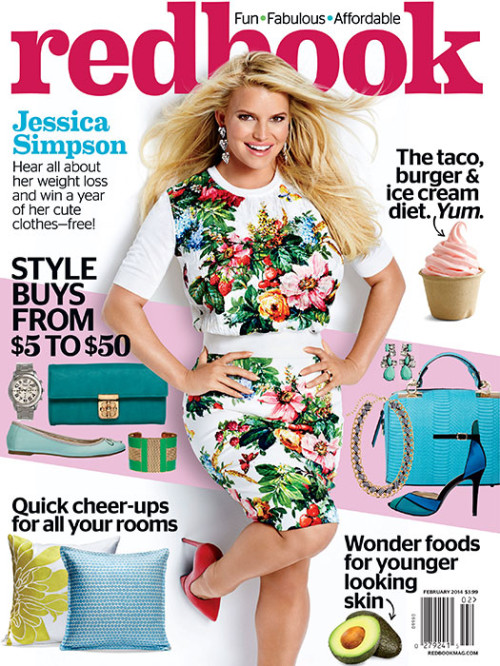 Showing of her post-pregnancy weight loss on the cover the February issue of Redbook, Jessica Simpson opens up about her being criticized for her weight gain while pregnant and her relationship with fiancee Eric Johnson.

The Fashion Star mentor admits she ignored the media while pregnant and instead focused on the happiness of being pregnant.

“I never listen to it, no matter who the press talks about when they’re pregnant. It’s ridiculous and unfair. I think any woman who is pregnant and creating a life is pretty much entitled to eat whatever she wants as long as she’s healthy. I wasn’t going to let the media take away from what was one of the happiest times in my life,” she told.

Simpson kicks off her Weight Watchers campaign this month.

Meanwhile, the mom to 18-month-old Maxwell Drew and 6-month-old Ace Knute opens up about her relationship with Johnson.

“I’ve learned that sometimes love is not enough. You can have a soul mate and be madly in love with that person, but it’s not necessarily enough. I think you have to have personalities that mesh well. You have to be the yin to their yang. You also have to be open to figuring things out together and communicating— even when it’s the last thing you want to do. I have to admit, it doesn’t hurt that Eric is one of the hottest men I’ve ever seen—and he looks amazing naked!” Simpson revealed.

The couple are said to be planning a wedding for this summer.

To read the full interview pick up Redbook on newsstands January 14.