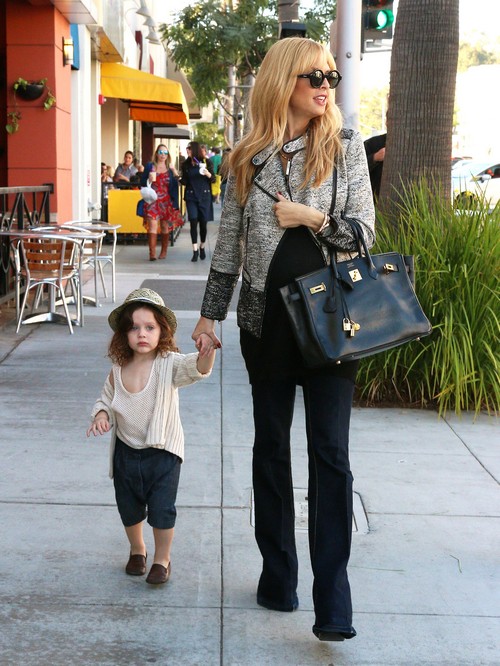 Celebrity stylist Rachel Zoe who announced in September 2013 that she was pregnant just revealed that she is nine-months pregnant and taking a break to wait for the birth of her child.  The news came as a shock to many people since Rachel is barely showing that she is pregnant.  By looking at the pictures from yesterday you can see she does not have much of a baby bump.

But Rachel confirmed at the second annual Baby2Baby Gala in CA to US Magazine that she was that far along when they asked about her pregnancy.  She said, “It’s wonderful. It’s great. I mean, I’m literally 9 months pregnant so this I think will probably be one of my last outings. I’m going into hibernation!”

Even though she claim to be going into hibernation two days after the even we caught up with her taking her adorable son Skyler Morrison Berman shopping at Tom’s Toys in Beverly Hills, California.

Rachel says once the baby is born she won’t be doing anything to lose weight.  She said, “chase a toddler and be a mother. Any new mother will tell you don’t have to exercise, you just have to be a mom. Being a mom is the best exercise!”

This is the second child for Rachel and her husband of seven-years  investment banker Rodger Berman.  What do you think CBLers is Rachel too thin to be nine-months pregnant?  Let us know your thoughts!