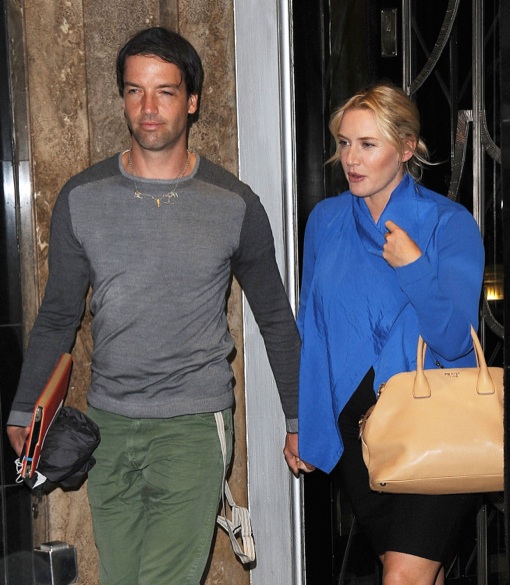 Kate Winslet and her husband Ned Rocknroll were pictured leaving the Claridges hotel in London, England on Tuesday (Sept. 17).

The Labor Day actress wore a black dress while hiding her bump under a bright blue sweater. She accessorized her look with a cream Prada bag and black flats.

Winslet is also mom to daughter Mia and son Joe insists she is a hands-on mom.

“My children are my whole life. Any mother knows that – the second your child is born, they become the first thing you think about when you wake up in the morning and the last thing you think about at night.” she told. “I’m a very hands-on mother … Even as I was walking from the elevator to this room [at Toronto International Film Festival], I was texting the doctor back in the UK to get an appointment for my son because he has an earache. I’m the number one person to do all that stuff for them. Isn’t that what a mother is supposed to do?”

This will be the first child for her and Rocknroll. Her two children are from previous relationships.