Anna Paquin: Sleep’s Not a Very Big Part of My Life 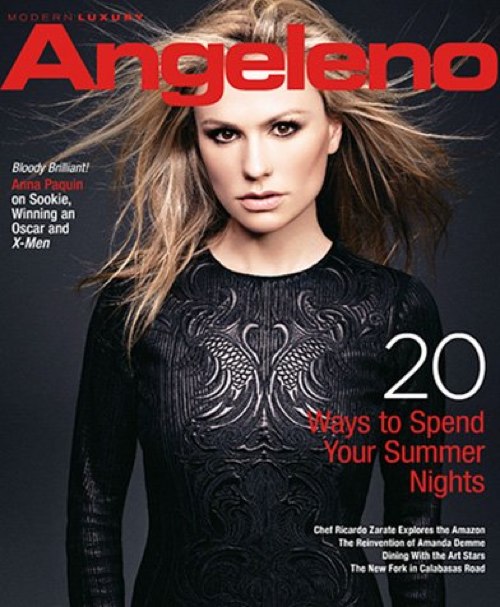 Covering the June 2013 issue of Angeleno magazine, Anna Paquin opens up about her career and her lack of time since becoming a mother.

The True Blood actress who welcomed twins last year with husband and co-star Stephen Moyer admits it is hard to balance being mom and her busy career.

“Sleep’s not a very big part of my life right now.” she tells. “But that’s fine. It’s kind of part of the deal.”

Anna explains that being an actress she will never be able to plan opportunities on her own schedule.

“This one of the jobs where you don’t get to pick the timing, and when it rains, it pours. When there are interesting things happening and interesting people you want to work with, you kind of jump on it and figure out the details, which thankfully have all kind of fallen into place. And then I’ve had a really, really awesome last few months,” she tells.

Although, between True Blood returning for its sixth season this summer on HBO and the return of the X-Men franchise, the star feels blessed that she has such a successful career.

“I’ve been really blessed. I’ve never really been drawn to things because I wanted to be famous or huge or anything. I’d rather do one day’s work on a movie that is really creatively interesting than be in every single frame of something that I find a little dull. I feel like that guided my choices a lot and I’ve consequently been drawn to people who, in the best possible way, kind of kicked my ass, because I didn’t want to be a weak link,” she says.

Do you watch True Blood? If so, are you excited for the new season?

Kristen Bell: Motherhood Is Actually Better Than I Expected