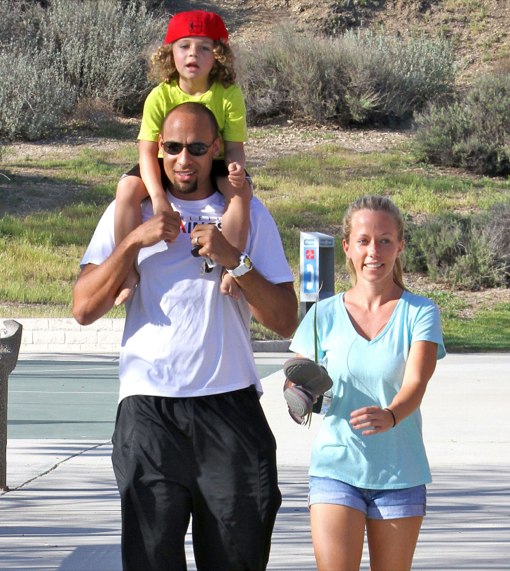 Kendra Wilkinson, her husband Hank Baskett, and their son Hank Jr were pictured spending the day at a park in Calabasas, CA on Saturday (March 16).

The reality stars looked like doting parents as they played with Hank Jr. After their playground fun, Hank gave the 3-year-old a piggyback ride.
Kendra recently appeared on Celebrity Wife Swap alongside Kate Gosselin.

On the premiere, Kate told Kendra that she “doesn’t care” about Hank.

“You let everybody else do everything because you don’t care,” Kate said on the episode. “Between [Hank] and Rosa, they do everything, so essentially it enables you to do nothing.”

Kendra admitted that she need to schedule more time with Hank, but liked that she was more laid back than the mom of eight.

“I need to dedicate more time with little Hank,” she said.

However, after the show aired a friend close to Kendra revealed that that she was hurt by Kate’s criticism.

“She loves [her son] with her whole heart and soul,” the friend told OK!. “Kendra knows she is a great mom because she and little Hank have so much fun together.”

Alessandra Ambrosio Takes Her Children to the Country Mart