Gwen Stefani on Motherhood: “It’s Not What You Think It’s Going to Be.” 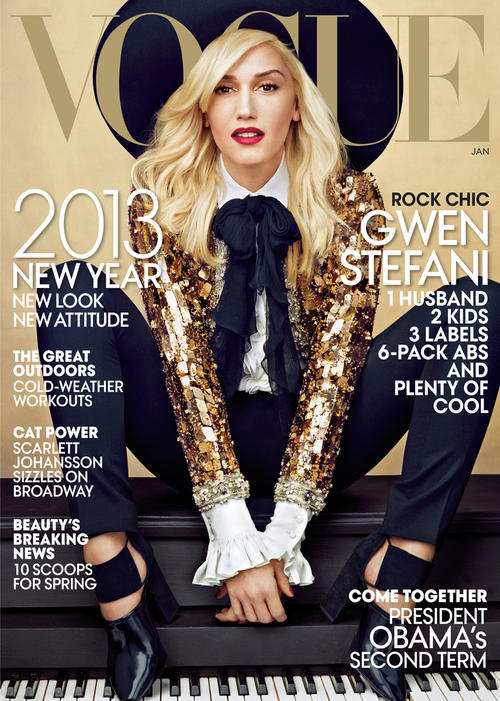 Appearing on the January 2013 issue of Vogue Magazine, Gwen Stefani opens up about being a mom to sons Kingston and Zuma, her husband Gavin Rossdale and balancing a successful music career.

“It’s super fun being a mom, but it’s not what you think it’s going to be. And it’s really gradual. At first, your life is totally the same. You have this cute little thing that you get to drive around everywhere and you’re so proud and it’s amazing. And as they grow older, it really does start to change your life. Like, Oh, my God, they have school, they have to get through first grade, they have to learn to read. It starts getting so serious, and you’re like, Aaaaaaah!”

On being pregnant while recording her first album:

“I did my first solo record and went on tour while I was pregnant. I would want to throw up during certain songs. Certain outfits would make me sick. It was torture. I toured until I was four and a half months pregnant, showing. I came home and had Kingston, and when he was eight months old, I went back on the road. I nursed him for fourteen months, so I would literally do my hair and makeup, go back to the bus, nurse him, put him down, and walk out onstage. And I did that for 100 shows.”

Being with Gavin for 16 years:

“It’s pride. You feel proud. There are just so many rewards that come with it. You have to work at it. But, actually, it’s fun to get to this point. Because you learn so much about somebody. It’s like these wars that go on and then you kind of get through it to the other side, and it’s like, Wow. And obviously, you get stronger. And then having kids takes the whole relationship to another place. It is the ultimate collaboration. Both of us have such strong opinions about how it should be, and it’s really fun to do it together.”