The Beckham Kids Take A Stroll In Lonodon 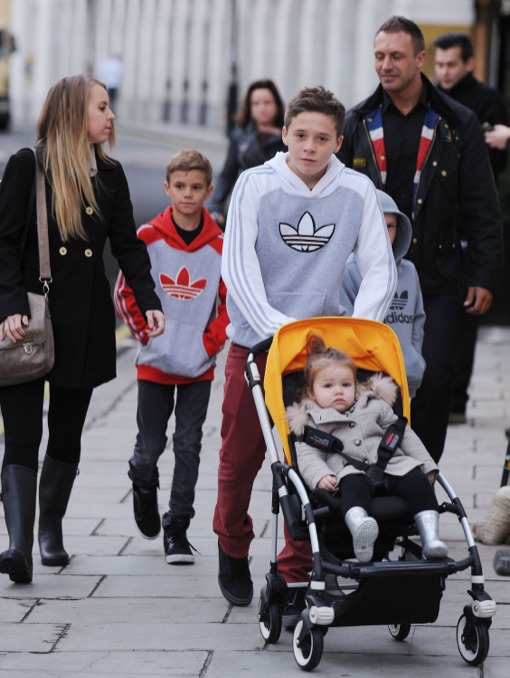 The couples four children, Brooklyn, Romeo and Cruz Beckham and Harper were spotted taking a stroll through the streets of London on Friday (Nov 23).

The three brothers donned Adidas sweaters with jeans while joined by a bodyguard and nanny. Brooklyn made it his duty to push his 16-month-old sister in her yellow Bugaboo stroller.

It was recently revealed that Brooklyn told his parents that he preferred to give to charities rather than receive presents for thanksgiving.

“Brooklyn told his mom and dad that he didn’t want to receive presents for Thanksgiving this year. He said instead he’d like to donate them to people who need them more,” according to a source at the Daily Star.

“Brooklyn asked one of the family bodyguards to take him to a Rite Aid store in Los Angeles so he could buy some first-aid kits to put in the charity parcels. He even persuaded his brothers Romeo, 10, and Cruz, 7, to give up their presents and pocket money for the homeless this year. The lads are planning to give big, fun packages to the local shelter,” the source added.

Jessica Simpson Is Grateful For Her Family