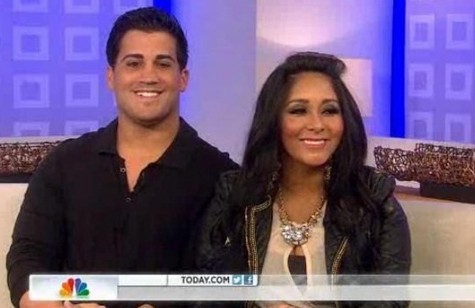 When we first met Nicole “Snooki” Polizzi she was totally focused on Guido’s with muscles, tanning and getting her drink on while Jersey Turnpiking on the dance floor.  Two months after delivering her son Lorenzo the already slimmed-down reality star sounds like a completely different person.  Snooki and her baby daddy, Jionni LaValle, have hit the publicity circuit, giving random interviews that coincide with MTV’s final season of The Jersey Shore.  Snooki thinks her son already takes after her,

“I think that he just always craves attention, and I feel like that’s me,” Snooki told Savanna Guthrie on the Today show this morning. “He always wants to be held and cuddled. “I definitely partied [enough] for like three people my entire life, so I feel like now I have a family, I have a baby, and this is just a new chapter in my life,” the reality star said. “And I love it, I’m just so excited.”

I have to say, her whole demeanor really has changed. She doesn’t sound like one of those Teen Mom stars that don’t seem to grasp how life changing a baby really is. Snooki gets it and is voluntarily trading in nightly parties for family time. She already has Halloween planned out for her crew, “I’m being wonder woman, [Jionni] is going to be captain America, and Lorenzo will be superman,”

So many Jersey Shore fans assumed that Snooki wouldn’t survive her pregnancy without partying and those same people expected her to be a lousy mother but from the looks of things, she’s off to a good start.  Will Snooki keep her life together and continue putting Lorenzo first?  Tell us your thoughts in the comments below!

Tamera Mowry: “I Seriously Feel Like I Have Been Pregnant Forever!”