Photos of Teen Mom Leah Messer-Calvert At The Park With A Very Pregnant Belly – Is It Twins Again? 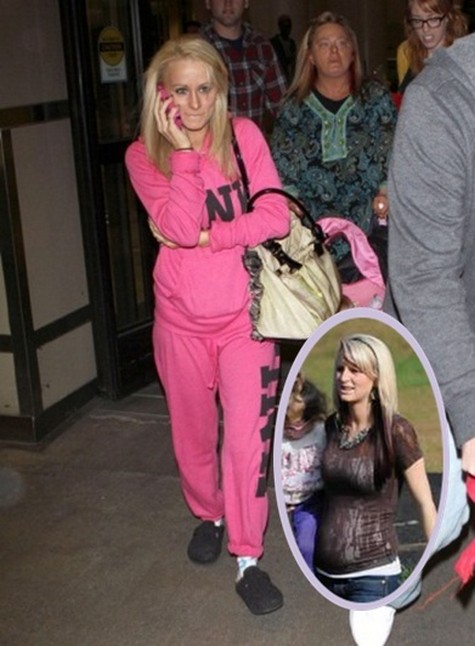 MTV has always claimed their hit show Teen Mom is not about exploiting young women in difficult situations, but about educating teens about birth control, STDs, and knowing options if they do become pregnant. Unfortunately, the message of emotional and financial stability before starting a family seems to have skipped over one of the Teen Mom 2 stars. Leah Messer was shocked to learn she was pregnant with twin girls at 16, and viewers were heartbroken to watch as her daughter Ali struggled with developmental problems, impairing the development of her legs and vision. Even worse, we saw her husband and the girls’ father Corey Simms buy himself a new truck, instead of helping to move the family into a home that wasn’t ridden with dangerous black mold spores.

After the divorce that followed Corey’s selfish decision, Leah began dating Jeremy Calvert and got pregnant again. In the season 3 trailer on MTV, we see Leah learn she has miscarried. The couple got engaged and married this April and announced they were expecting another baby just two weeks ago. But photos taken of Leah last week show that she’s been keeping secrets—the young mom is easily in her second trimester, and experts guess she will be giving birth this winter.

I can’t decide if I’m happy to hear that Leah is married and pregnant, or slightly disappointed. Of course, her MTV paychecks are generous, but she is very young and has given up a lot of career dreams. It seems counterintuitive to take on the responsibility of another baby, especially with a man whom she’s known for such a short amount of time. What message does this tell viewers? You’ll have to decide for yourself, I suppose. But I am sure MTV will edit to show the worst, most stressful and emotional parts of her life, making sure viewers know that it isn’t all playtime and parks with the twins.