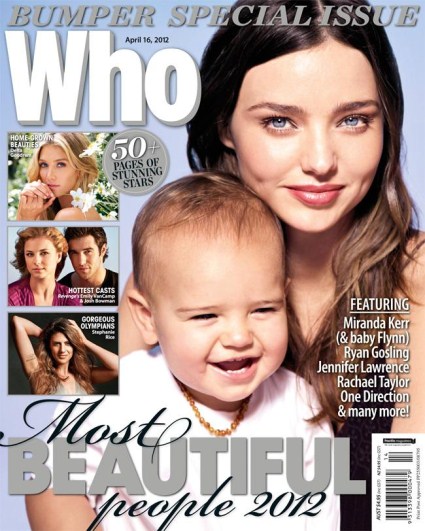 Miranda Kerr is pictured on the latest cover of Australia’s Who magazine with her gorgeous 15 month old son Flynn Bloom. He’s not used to modeling assignments and cover shoots but he looks like a natural in front of the camera. Miranda and her husband Orlando Bloom‘s good genes are certainly on display.

The 28 year old model  – who hails from Down Under but now lives in the US – and her toddler have been named in the magazine’s annual Most Beautiful People list. Who is the Aussie equivalent of America’s People magazine. Also getting a gong in 2012 – The Hunger Games star Jennifer Lawrence, Kristen Stewart and Jennifer Aniston. David Beckham gets an honorable mention for being the Hottest Dad in the World. It’s a pity Orlando didn’t make the cut and make it a family affair.

Life has changed big time for Miranda since becoming a Mom at the start of last year. But it sounds like she has priorities in the right order. She says ‘I was working 18-hour days. Now that pace has slowed so I can spend the majority of my time with Flynn. I am first a wife and a mother, and then comes work.’

Are You Running Out To Buy? Snooki is Designing A New Line Of Children’s Slippers!