Sarah Jessica Parker Out And About With Twins Loretta And Tabitha 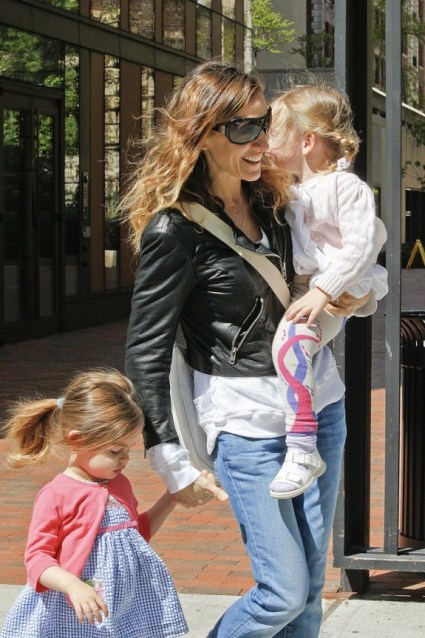 Sarah Jessica Parker and her two year old twins Loretta Broderick and Tabitha Broderick were spotted out and about in their hometown of New York yesterday. The girls are growing up quick. The actress was picking them up from preschool…the trio then walked home in the sunshine.

SJP and her actor husband Matthew Broderick are regularly seen on the streets of the Big Apple taking their three kids to and from school. They also have a 9 year old son James Wilkie Broderick. When it comes to parenting these two are very hands on. They treasure the time spent with their brood and the school run is one of those times. They seem totally down to earth despite their amazing careers.

But they will soon be swapping Manhattan for Brooklyn. An insider says ‘They loved the West Village but wanted something more private, laid-back and discreet‘. So they’re packing up and moving on. The couple are buying two adjacent townhouses in Brooklyn. The  properties will then be joined to give the family of five plenty of room. Their new home will come in at about 7,000 square feet.

So how does Sarah – who is best known for playing Carrie Bradshaw in Sex And The City juggle being a Mom with her career – ‘There are many months when I’m not working and many months when Matthew isn’t working and it can’t all be on one person. You pass the baton and then the guy sprints ahead and runs his ass off!‘ In other words they share the parental responsibilities.

Brad Pitt’s Rep Confirm’s He and Angelina Jolie are Engaged!