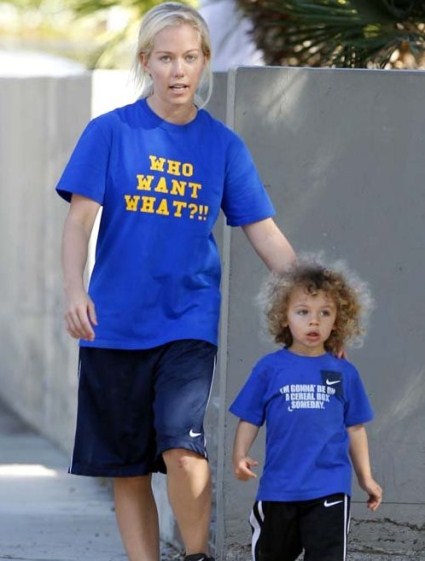 Kendra Wilkinson‘s little boy is so cute. Hank Jr has a gorgeous mop of curls and underneath lies a very smart 2 year old. You see, Hank is bilingual – well, kind of…he’s been picking up sentences in other languages from his nanny and surprising his Mom, Dad Hank Baskett and friends.

Reality TV star Kendra explained to People how it happened ‘We were at a friend’s house for dinner and all of a sudden out of nowhere he speaks this sentence in Spanish. He said, ‘I would like more milk, please‘. As you can imagine the blonde beauty wondered how her little boy knew how to speak another language . The she realised it was his nanny who speaks to her son in her native tongue.

The 26 year old says ‘I never expected it, and he’s doing so good. I was so caught off-guard. I thought he was speaking baby. Now Hank and I are going to have to learn Spanish, but it’s a good thing.’

We might get to see the super smart 2 year old showing off in Spanish in his Mom’s new TV show called Kendra On Top. We might also get a glimpse into the former Playboy model’s plans to expand her brood. She told USA Today ‘Do we want to have baby number two right now? You’ll get a chance to go through that with me. I want to figure it out and bring my fans through that process. Who knows – you might even see me on top of Hank and get pregnant!