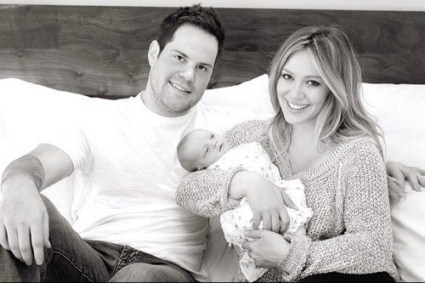 We’ve seen pictures of new Mom Hilary Duff and pictures of her new son Luca Cruz Comrie – but this is the first family portrait to be released by the actress and her husband Mike Comrie. It’s stunning!

Unlike some new Moms – I’m thinking Beyonce and Charlize Theron – the 24 year old has been more than happy to share pictures of her little boy with the public. Most of the gorgeous pictures have been tweeted by the new parent herself. It’s lovely that she wants to share her happiness with her fans.

The former child star has been gushing about her new role. She told Life & Style magazine ‘The past couple of weeks have been the most joyful time. Luca makes us smile all day, every day!‘ She added ‘Motherhood can have its difficulties, but luckily, Luca has been a great baby.‘ Hilary says some things  – like rest – is a little hard to come by but she can’t complain ‘I’m a bit short on sleep, but he has been the best behaved little boy. We are so fortunate to have a strong, healthy and happy baby.‘

The Material Girls star  welcomed Luca into the world less than a month ago but she’s already working out. She’s been spotted heading to the gym in Hollywood on several occasions and has also been tweeting about getting back into shape. But I don’t think work is not on her list of priorities at the moment. She said before giving birth ‘I think that after I have the baby I’ll want to sit still for a few months and learn how to be a really good mom.’

Alessandra Ambrosio Bumps On The Cover Of Yo Dona