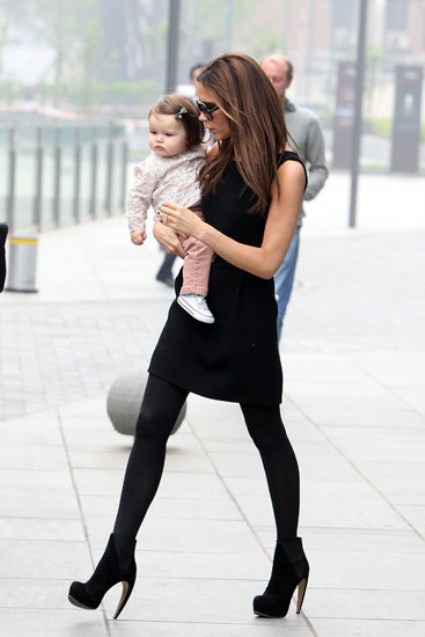 Victoria Beckham is a super stylish Mother of four. Daughter Harper Beckham has inherited the fashion forward gene so the pair  looked picture perfect when they stepped out in Beijing this week. The former Posh Spice also made walking in those uber-high boots while carrying  a young one look effortless!

Of course Mom looked like she’d just stepped off the runway at a fashion show, but Harper was also tres chic. The 9 month old was wearing a cute floral top, pastel colored jeans and the smallest pair of Converse I’ve ever seen. The outfit was topped off with a bow in the hair. I think Victoria spends as much time on her daughter’s outfits as her own. It’s fashion first in this family.

The fashion designer was in Beijing to launch the Victoria Beckham limited edition Range Rover. Yes, this busy Mom also has time to design clothes and cars. It was a girls only trip. Husband David Beckham and their three sons Brooklyn Beckham, Romeo Beckham and Cruz Beckham were home in America. So the pair had plenty of Mother-daughter time.

Victoria has made no secret of the fact motherhood and working can be a struggle but she told WWD she’s very hands on when it comes to her children ‘There are quite a few video conferences at 5 a.m. with me in my dressing gown, holding baby. For me it’s no different than it is for a lot of women out there. It’s like juggling glass balls. I love it.’ Good on you Victoria!