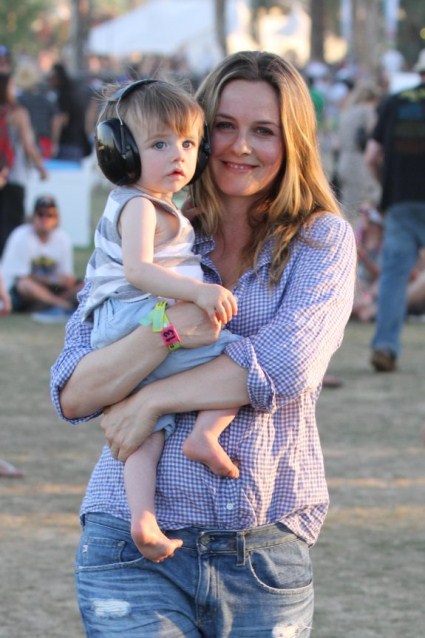 Lots of famous faces attended the Coachella Music festival in California over the weekend. We spotted Alicia Silverstone enjoying the music with her husband Christopher Jarecki and 11 month old son Bear Blu. Bear was wearing the cutest little headphones to cover his young ears!

Mom held onto Bear for some of the time then Dad stepped in. He put his son in a sling and carried him around the grounds. Bear is getting into music at a very young age. I wonder which band he enjoyed the most? Did he rock out to Radiohead or Gotye? His parents were definitely enjoying the day out.

The Clueless star recently made headlines for her baby feeding practices. The 35 year old was taken to task by many for pre-chewing her young son’s food. A video of her doing it went viral. Alicia hit back saying ‘People have been feeding their kids that way for thousands for years. It’s a weaning process. Honestly, when I posted the video I was not thinking, so maybe I was like Cher! I think it’s adorable and it makes me laugh every time he does it. He attacks my mouth and I think it’s adorable. He also knows how to use his hands and he also eats regular food so when babies are weaning, he still breastfeeds. Some people think that’s disgusting too which is insane.’

The actress will soon be appearing on our television screens. She’ll be a guest star on an upcoming episode of Suburgatory. She co-stars with one time big screen pal Jeremy Sisto.
VIEW GALLERY /4 PHOTOS
Continue Reading