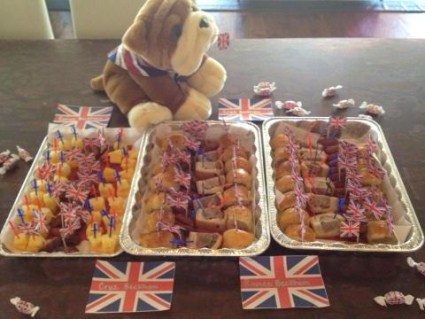 Is there no end to Victoria Beckham‘s talents? She’s a former pop star, fashion designer, mum of four and knows her way around a kitchen as well. She was so proud of her culinary efforts yesterday she tweeted a picture!

Victoria donned her kitchen apron for her two sons Romeo Beckham and Cruz Beckham. There was an International Food Day at their Los Angeles school so she wanted to contribute a dish. Of course the Beckhams originally hail from Britain so the former Posh Spice decided to go back to her roots and give the American children a taste of home. But what could she whip up?

She made sausage rolls as well as pineapple and cheese sticks. The budding designer then decorated them with union jack flags so everyone knew where her boys were from. The busy Mom kept her Twitter followers across her adventures in the kitchen. She tweeted ‘School project!! International food day for Romeo and Cruz, started preparing x vb‘ A short time late came another tweet ‘Just finished cooking! Very proud to be British! X vb.’ And there was this picture of her handiwork. It looks delicious – I’m getting hungry!

Good on Vic for rolling up her sleeves and taking on the task herself. It’s not like she has hours of spare time! She also has little Harper Beckham who is less than a year old …and 13 year old Brooklyn Beckham to keep her on her toes.

We do know the family like to indulge in British food from time to time. Husband David Beckham has been spotted at a specialist food store in LA stocking up on some treats from home.