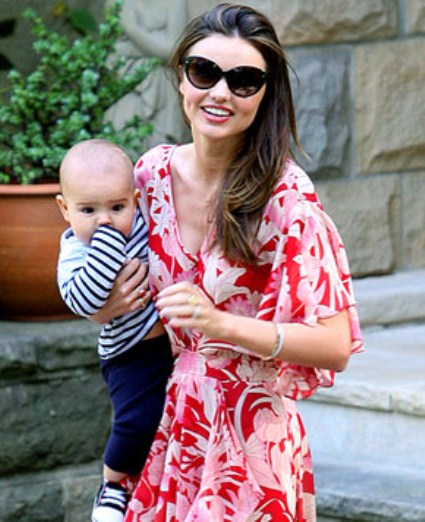 The mum of one explained to People it was a small party with ‘five little friends … about the same age . There were a lot of balloons. We had a balloon man come because [Flynn] likes balloons. That was a lot of fun.’ The adorable little boy also discovered what cake was all about ‘it was the first cake he had ever seen or tasted. It was a gluten-free cake and organic, of course, he put his face in the cake. It was a healthy kick-start to his first birthday.’

Flynn is growing up fast. The Victoria’s Secret model says he’s ‘doing something different’ every day. And it won’t be long til he’s following his famous Mom and Dad everywhere…Miranda says he’s ‘almost walking‘.

The new face of Qantas Airlines is full of praise for her actor husband. She says he’s a natural when it comes to fatherhood ‘He has really stepped up to the role and is very hands-on’ she says ‘It makes me proud that he is such a good dad.’

Only last month Orlando was saying the same thing about his gorgeous wife. He reckons Miranda is even more beautiful now that she’s a Mom and it’s been wonderful seeing her come into her own. Awww they make such a lovely family – and a very photogenic one too!