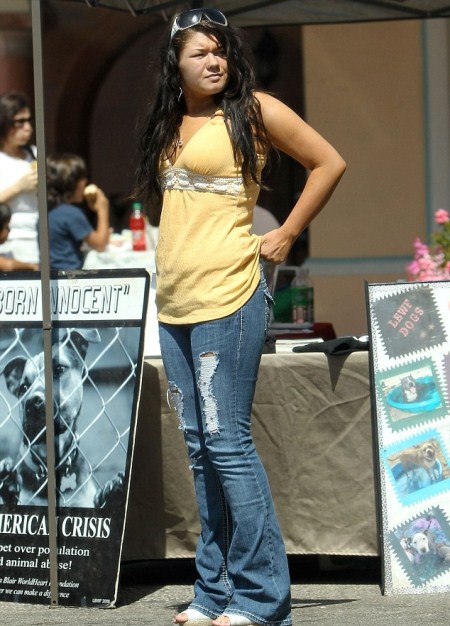 Teen Mom’s Amber Portwood was rushed to the hospital by ambulance after suffering from a  panic attack Wednesday afternoon.

A source close to Portwood told she was with her cousin Krystal Zion at her home in Anderson, Indiana, when stress overcame her and she could not breathe. After Krystal called 911, Amber was rushed away by ambulance to st. John’s hospital and was immediately hooked up to an oxygen machine to assist her breathing.

‘Amber suffers from a severe anxiety disorder,’ a source told.

‘She has panic attacks all the time, but this time it was so bad that she couldn’t breathe.”

‘Her cousin was worried so she called and ambulance to come help.’

Amber has been taking the prescription medicine Klonopin for nearly two years to combat her anxiety disorder.

Sources say Amber’s two-year-old daughter Leah was with her ex-boyfriend Gary Shirley at his home, at the time.

Some friends and neighbours of the young mother are suggesting she may have overdosed or even mixed her prescription medicine with alcohol.

‘Some people are saying Amber was rushed to the hospital because of a drug overdose, but right now that’s just a rumor. The most likely explanation is that she forgot to take her medicine and when her panic attack came on she couldn’t catch her breath.’‘ the source told.

This news comes after Portwood’s  brother Shawn Portwood told Life & Style that Amber is spending more time out partying than she is reconnecting with her daughter, Leah.

Jennifer Aniston Not Desperate To Start A Family