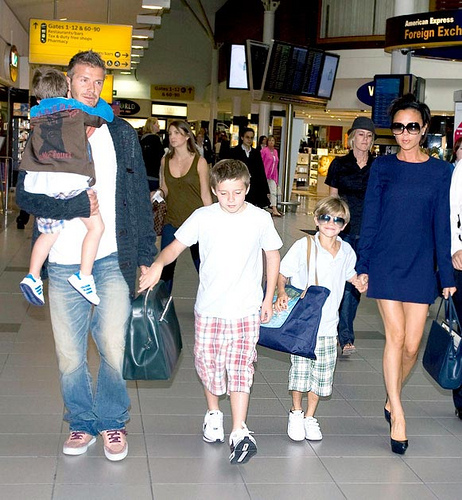 David Beckham has revealed the reasons behind his newborn daughter Harper Seven’s name. In an interview, David says they named her after Harper Lee, the author of Victoria’s favorite book To Kill a Mockingbird.

He said: ‘A lot of thought goes into our children’s names and Harper was a name that we’ve loved for a long time for a couple of reasons”.

‘One reason is Harper’s an old English name which we loved and one of the other reasons was Victoria’s favorite book is To Kill A Mockingbird and the author was Harper Lee. It’s a very strong, passionate book. That’s where Harper came from.’

David’s former shirt number for Manchester United and England also played a strong part in them choosing Seven as a middle name.

‘And then Seven you know, a lot of people have assumed its just because of my shirt number that I wore for many years and part of it is because I had so much luck around wearing that number, wearing it for England, wearing it for Manchester United. It was such an influential number throughout my career and a lucky number… but that wasn’t the main reason. The other reasons behind Seven was because it symbolizes spiritual perfection, the Seven Wonders Of The World, seven colours of the rainbow and in many cultures around the world it’s regarded as a lucky number.’
‘So we love the name, we love Harper Seven. We’re very proud of having her in our lives and in our family and it’s an amazing time for our family right now.’
Continue Reading

Nick Lachey and Vanessa Minnillo Want To Start A Family

Tori Spelling Hits the Shops With Bump and Children