Are Pregnancy Pillows Worth the Cost? 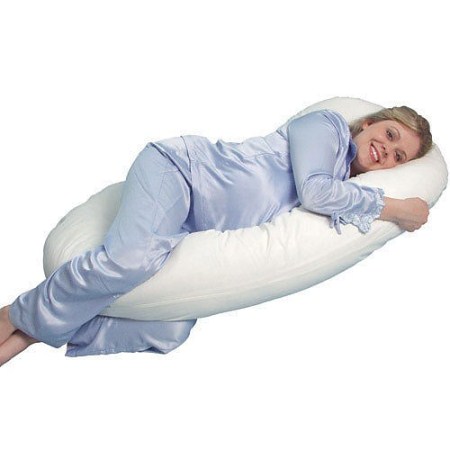 Pregnancy and sleep don’t mix.  Every pregnant women experiences nights where every position is uncomfortable and every body part feels like it’s aching. This was one of the  first things I was worried about when I found out I was pregnant.  Early on, I found my sleeping experience changed.  First, it was the constant early pregnancy cramps that kept me tossing. Then, it was getting up to pee every freaking hour of the night!  I knew I had to find a solution before the sleeping issue really got bad.  After some searching, I found the so called, “pregnancy pillow”.  There are a variety of styles, but essentially they all claim do the same thing: provide pregnant women with a comfortable night’s sleep.   I purchased Leachco’s Snoogle Total body Pillow from Babies ‘R’ Us.  The picture above illustrates how it can be used. It is also possible to place it behind your back too.

The first night of use I feel in love with it. It was divine! Maybe, not so divine for my hubby!  It really helped with aching in my stomach and I slept more soundly. However, as time passed  I started to have problems with it.  First, in the second trimester my ear resting on the pillow would start to ache. I would actually wake up and change sides because it hurt so much.  As I started to get bigger wrapping the bottom part around my leg was not as satisfying. I had to tug at it more. Lastly, getting in and out of bed to go to the washroom became a really pain with the pillow.

In conclusion, the pregnancy pillow was great in the first trimester.  Would I buy a pillow costing over $60 for one trimester though? No! Invest in a couple of pillows and they will do the trick.