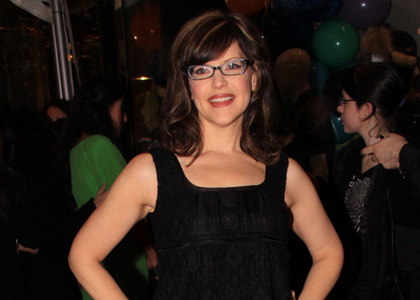 Lisa Loeb is no stranger to the nightly scene. Her late nights are surprisingly not due to her 17-month-old daughter. Even though her music career took her into the late hours of the night, that has all changed since motherhood. After giving birth to Lyla Rose, she said, “I’m the person who would normally stay up until 3 in the morning and sleep until 9 in the morning. But now with the baby, it’s super early to bed. It’s a little bit of a challenge to try to balance my work with my family, but my family comes first.”

Surprisingly the singer doesn’t sing to her daughter at bedtime!

“It’s not great for us because it actually wakes the baby up and makes her get engaged and want to stay up. It’s really fun and exciting, but we usually stay away from too much music at night because it’s just another activating activity, instead of putting her to sleep.”

Lisa plays a leading role in the cartoon Jake and the Never Land Pirates and is loving the flexibility of the job:

“It allows me to be at home a lot of the time, and still get to work with other people. It’s almost the best of both worlds. I get to be a full-time parent, but also get to work.”