Suri Cruise Can Have Her Pacifier For As Long As She Wants! 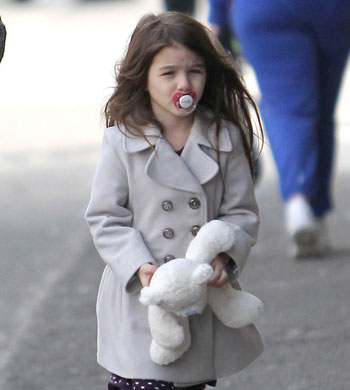 Katie Holmes takes her daughter Suri Cruise to Vera’s Burgers in Vancouver as the mother/daughter duo spend their Sunday together. Suri, 4, could be seen sucking on a pacifier and holding onto a stuffed animal while arriving at the burger spot.  Suri who is five almost years old still has her pacifier and her parents Katie Holmes and Tom Cruise have no intention of taking it away from her anytime soon.  The couple do not care what other people think they intend to let Suri decide when she wants to give it up.

A source said, “Suri just isn’t told ‘no’ very often.  Scientology encourages you to make your own decision and learn lessons as you live your life. She’ll know herself when it’s time to throw the pacifier away, plain and simple.”

They don’t feel using a pacifier hurts Suri so they feel it is better to let her learn to make her own decisions.  Kids can be cruel and I am guessing that when Suri goes to school her other school mates will tease her if she has the pacifier.  I bet that will convince her to give it up!

Kate Hudson – Pregnant In A Bikini On Vacation