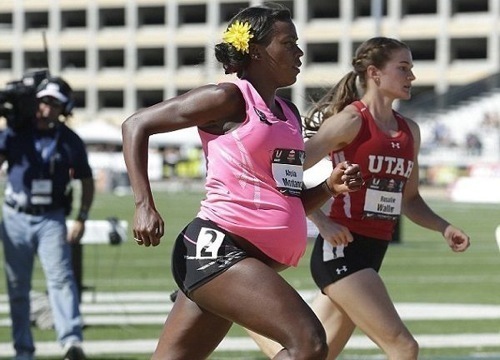 Pregnant Olympian, Alysia Montano has the internet abuzz as she completed an 800m race in Sacramento this week, in just over 2 minutes.

The 5 time U.S. National champion had the green light from doctors. She ran 35 seconds slower than her personal best. Although she finished last –  Alysia performed at a level most would still struggle to compete at. And her efforts were met with a standing ovation.

I’ve been running throughout my pregnancy and I felt really, really good during the whole process.

While moderate exercise is advised during pregnancy, experts say it’s safe for women who are used to being fit to exercise while pregnant at a lower intensity than before.

Montano received the all-clear from doctors and said she hoped to dispel misconceptions about exercise and pregnancy.

Nicknamed the”Flying Flower,” the seasoned runner expressed what it meant to get her Dr.’s approval:

That took away any fear of what the outside world might think about a woman running during her pregnancy. What I found out mostly was that exercising during pregnancy is actually much better for the mom and the baby…I did all the things I normally do…I just happened to be pregnant. This is my normal this year.

In her blog, Montano writes how important it was to race, even with no chance of winning. She emphasises that it’s taking part that counts.

Racing is still very enjoyable for me because I’ve been able to think of it like a kid does. They’re so innocent – they’re wanting to win but they’re having fun, too.

As you get older, it’s easy to put importance on things that really don’t matter and then succumb to that pressure; so I don’t like to get myself wrapped up by talking about competitive goals too much.

Montano is likely to start training when it is safe to do so after the baby is born. She also reveals ambitions to open a fitness studio for working parents and children. She explains:

I want to teach people about exercise and fitness and how it can be really fun, and I want to help parents educate their children about it, because that’s where everything starts.

While she received positive reinforcement on race day, other pregnant runners have not been so lucky. The issue is one of controversy for many who are viewed as putting their baby at risk with what is a high level of exercise for many.

Sheeva Talebian, M.D is an expert in maternal health and has a lot to say on running while pregnant. She states:

Running is safe anytime – during the first, second and third trimester – if you are having an uncomplicated pregnancy.

And remember to always check with your Dr. before starting something new or if you have concerns over the level of intensity of any activity.