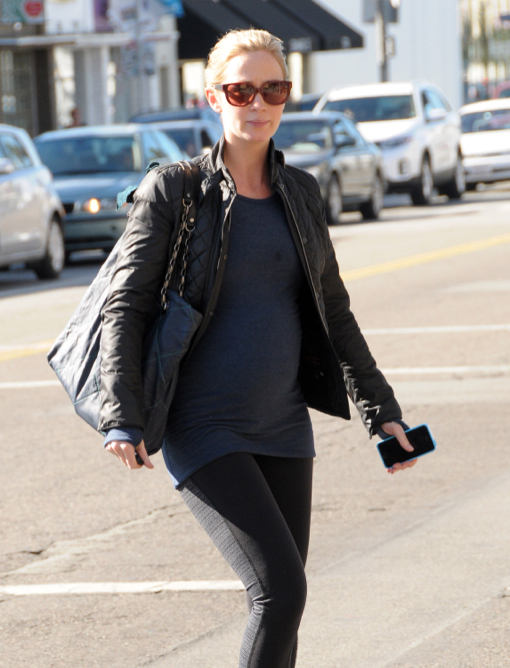 If you wanna talk about a glowing mamma, you should look no farther than Emily Blunt. The Devil Wears Prada actress was spotted on a gym run in West Hollywood in her workout gear looking fit and radiating the joy of her upcoming motherhood. Things seem swell in Emily Blunt and husband Tom Krasinski land. The couple are seen regularly attending movies, dining, and just enjoying the overall culture of Los Angeles like any normal couple should do. They are a low key couple for all intents and purposes and, more often than not, that means that things are going pretty well up there in Hollywoodland.

For John, it doesn’t appear he ever intended to fall into such a serious relationship so quickly. The Office actor was initially planning to focus on his acting career when he got to L.A. but meeting Blunt changed a whole lot of things for the 33-year-old. He explains:

‘It was one of those things where I wasn’t really looking for a relationship and I was thinking I’m going to take my time in L.A’ he had told talk show host Ellen DeGeneres. ‘Then I met her and I was so nervous. I was like, “Oh god, I think I’m going to fall in love with her.” As I shook her hand I went, “I like you.”

So he met her, and then everything fell into place. Sounds just like the kind of love story one can actually believe in Hollywood these days. But just the mere fact that the couple have been, well, a couple since 2008 – which is like 50 years in normal people time – is a probably the biggest indicator that this romance might not be doomed to fail. Blunt is a couple of months pregnant now, but she seems to take pretty good care of herself during this tumultuous time of a mother-to-be. You can just tell since she doesn’t tip the scale of looks in one extreme or another and looks right in her element in these pictures sporting that little round thingy in her belly.

For a different look at Emily Blunt’s pregnancy style you can click here.

Mike Comrie Bonds With Luca at the Park

This Is How Gisele Bundchen Gets Ready