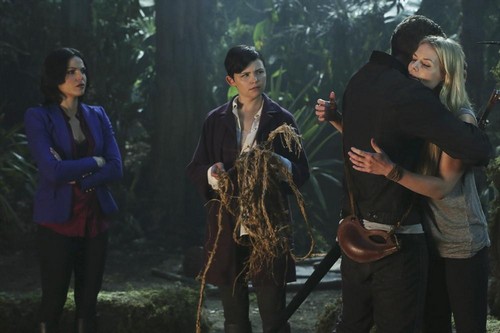 On Sunday my favorite fantasy drama Once Upon A Time returns to ABC with a new episode called, “Good Form.”  Last week’s episode was fantastic and we cannot wait until Sunday’s new episode.  Good news, we have managed to get our hands on a sneak peek video and a few spoilers to whet your appetite as you wait  for next week’s episode 5.

On next week’s episode Hook takes a dying David on a journey to find a map that could lead them off Neverland, and in the Fairy Tale land of the past, Hook and his brother sail to an uncharted land to find a powerful healing plant.

Official ABC synopsis of next week’s episode: “With the deadly Dreamshade coursing through David’s body and close to death, Hook takes him on one last journey to find a sextant that could help them decipher a map that would lead them off Neverland. Meanwhile, in the Fairy Tale Land that was, Killian Jones – aka Hook – and his brother, Captain Liam, sail off under orders of the King to find a powerful indigenous plant on an uncharted land that could help heal any injury.”