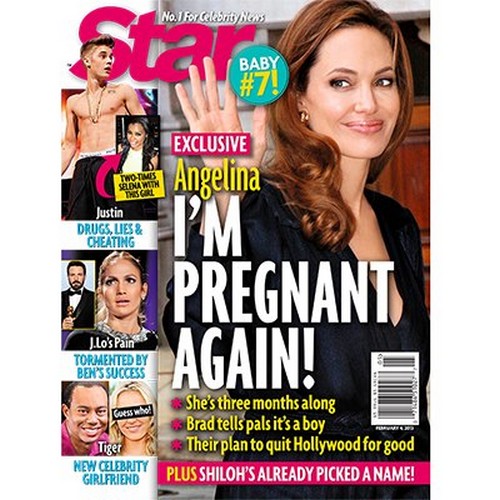 The current issue of STAR MAGAZINE features the cover story, “Angelina I’m Pregnant Again.”  In an explosive exclusive report the magazine claims that Angelina Jolie is pregnant again.  Angelina and her fiance Brad Pitt already have three biological children and have adopted three children, so this would make baby number 7.

The magazine goes on too claim that Angelina is three months pregnant and Brad has leaked the news that the new baby is a boy to his friends.  Angelina has always said that she and Brad, “have a very normal, very grounded home. And we’re friends, and we have a laugh with our kids.”  So I guess it makes sense that they would have more children.

There have been rumors for a while now that Angelina was considering retiring from acting, she would enjoy being home with her children.  Brad has also mentioned retiring when he turns 50, which is this year.  The magazine claims that the couple is putting a retirement plan together and they have the details.

Their children are really excited about the news and their daughter Shiloh already has a name picked out for the new baby.

What do you think is Angelina pregnant again or is this just groundless speculation on the part of Star to sell more magazines?  Hit the comments and let us know your thoughts!

When Breastfeeding Fails: A Mother’s Guilt

Miranda Kerr & Orlando Bloom Jet Off With Their Tot