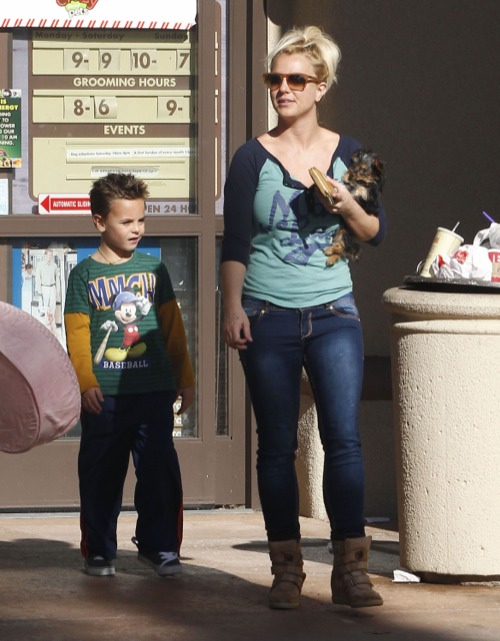 Just as Britney Spears was building a solid, drug free foundation, old demons have come to haunt her! Britney’s relationship with Kevin Federline went a mile a minute, turning the singer from teen sensation to has-been train wreck. It was a sad sight for Britney fans to behold. But she got two gorgeous sons out of the experience–Sean Preston Federline and Jayden Kay Federline. But now, a nasty lawsuit filed last week in Florida by Kevin’s brother Christopher Federline claims that he had an affair with the pop star, and that her son Sean is actually his child!

A source close to Christopher reported to National Enquirer (I know, I know!), that Christopher alleges that Britney stole his credit card to go shopping, and then harassed him, threatening to tell Kevin about their affair if he went to the authorities. “She is out of control and a maniac,” he said. But somehow, Chris didn’t want the public to find out about this! “Chris says the fling was a mistake,” an insider revealed. “He says he al­ways felt bad about it and kept it to himself because he didn’t want Alisha, his wife at the time, to find out.”

So, Chris filed on accident (How do you accidentally file a lawsuit? This isn’t like accidentally shopping online, or accidentally leaving the stove on!), requesting a temporary restraining order to protect him from Britney’s blackmail and threats–and now everyone knows he is trying to claim paternity, including his wife Alisha. This all sounds like a crazy grasp for fame, and we’re sorry that Britney and her family have to go through it! Britney has been in a stable, happy relationship with Jason Trawick–the two got engaged last year–and it sucks that people keep trying to cause drama! We hope she can shelter her boys from their crazy uncle. Do you think the paternity claim has any truth to it?